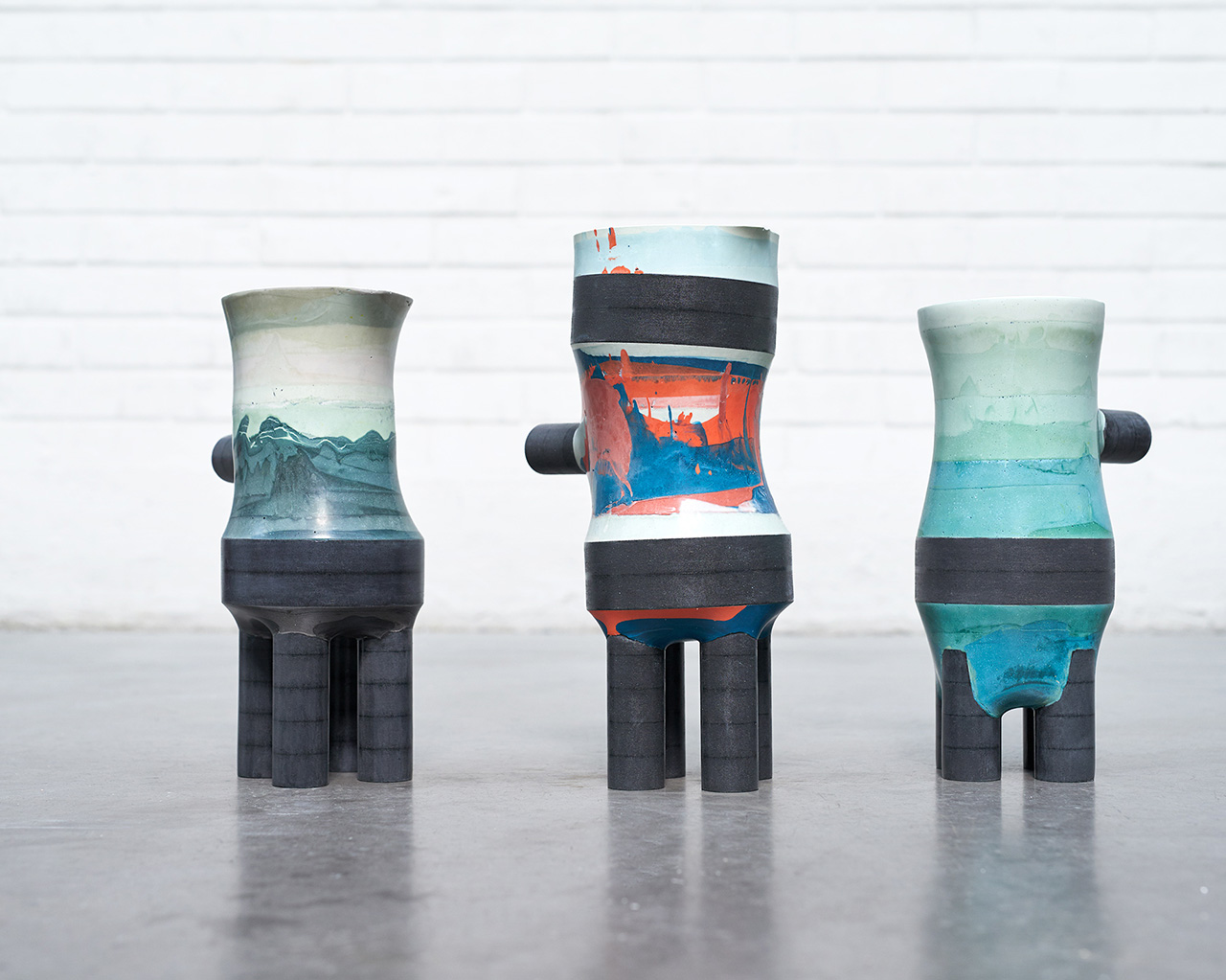 I had been looking for the right school and finally found one that I liked, Ensci Les Atelier in Paris. The school has fantastic workshops, for example for metal, wood and plastic, and an open-minded approach to design. There would be people building cars or working on computer software side by side. I needed many kinds of design around me, a bigger environment to find my path. I had been looking for the right school and finally found one that I liked, Ensci Les Atelier in Paris. The school has fantastic workshops, for example for metal, wood and plastic, and an open-minded approach to design. There would be people building cars or working on computer software side by side. I needed many kinds of design around me, a bigger environment to find my path. But to apply, you had to send a portfolio and do an interview in French. And I couldn’t speak a word of it. Somehow I managed to bullshit my way in. I moved to Paris in 2010 and graduated as an industrial designer in 2016 [with honours, ed.]. In my final project Main D’æuvre*, instead of drawing and then creating the final item, I’m mixing those two phases together. I draw the object while I create it. I wanted to be able to create something that I could recreate; a process that I design as I make the project, at the same time. There’s this constant question of ‘how can I do this?’. If I wanted to mould the products by hand, I would need flexible moulds. So I found latex as a material. Then, there was the next challenge and the next solution, then the next one. It really goes through trying, making a mistake, another one, yet another one. That is how I work. I spend a lot of time in the workshop.

Design is always about problem solving. It pushes me forward when I have to figure out a way to do [what I want to do]. I put myself into situations where I have to try new things. Of course I don’t exactly love it when things aren’t working, but when you finally find a way, that’s when it’s all worth it. My goal is a positive connection between the user and the object. I create objects that I want to be unique. When I use my process, I have full control over production and can communicate it with the user. This relationship is very important for me. I think people should see more of how objects are made. If they knew the process, they would think differently about them. I don’t use any high-tech machines, there’s no crazy futuristic machine from where the product just magically pops out. I actually make everything by hand and therefore it is easier to understand the process. I won the green card in a lottery, so I will move to New York in September. The plan is to set up my own studio. People ask me, ‘How can you, you’ve only just finished school?’ But I feel ready. I cannot imagine myself designing for others. It is just not the kind of design I do.
At the end of June, I’ll participate in an international design competition in Villa Noailles, Hyeres, where 10 pre-selected designers will show their work to an international jury lead by French designer Inga Sempé. Soon I will also be heading to Greenland for a project called Hors Pistes. In it, six young designers work with local Greenlandic craftsmen to build something together that can then be produced locally. I am also working on a dance piece with choreographer Rósa Ómarsdóttir. It will premiere in Brussels this autumn. In Paris, so many people are working on designing the environment that we live in. At school, we’ve been working on projects with the public transport company SNCF, for example. They are keen on attracting young designers to come work for them upon graduation.
In Iceland, it is completely different, but then again, there are not so many people to organize, nor are there big cities. To me, it seems like there is too much focus on product design and perhaps we miss the fact that design can be so many things. Design is such a huge world and can go in so many different directions.
What I miss from Iceland is speaking the language, mastering it so completely. It makes everything easier. In general, everything is easier in Iceland. In France, the first answer is always ‘Non, ce n’est pas possible’. Then you need to be very polite and try and try, and after an hour it may be possible. A lot of people are interested in Iceland. It can help you create a connection in order to present your work. But in the end it’s the quality of the work that speaks. So many people say that they can see the Icelandic inspiration in my work. They have this idea of an elf world, and see it in your work, regardless of where the inspiration actually comes from.
I never think about my nationality. Design is an international industry, so you, too, have to be. I’m definitely more connected to the French design industry, but it’s a little like when you have parents from different countries: when I’m in France, I’m Icelandic, and when I am in Iceland, I can see where French has influenced me, and in the end you are a foreigner everywhere anyway. In general, I don’t like to categorize myself. People say, ‘you make objects so you are a product designer’ or ‘you studied industrial design so you’re an industrial designer’. I don’t like to put these stamps on myself. You need to have an open mind, work in different cities and with different people. If not, you’ll get stuck in your own little world.