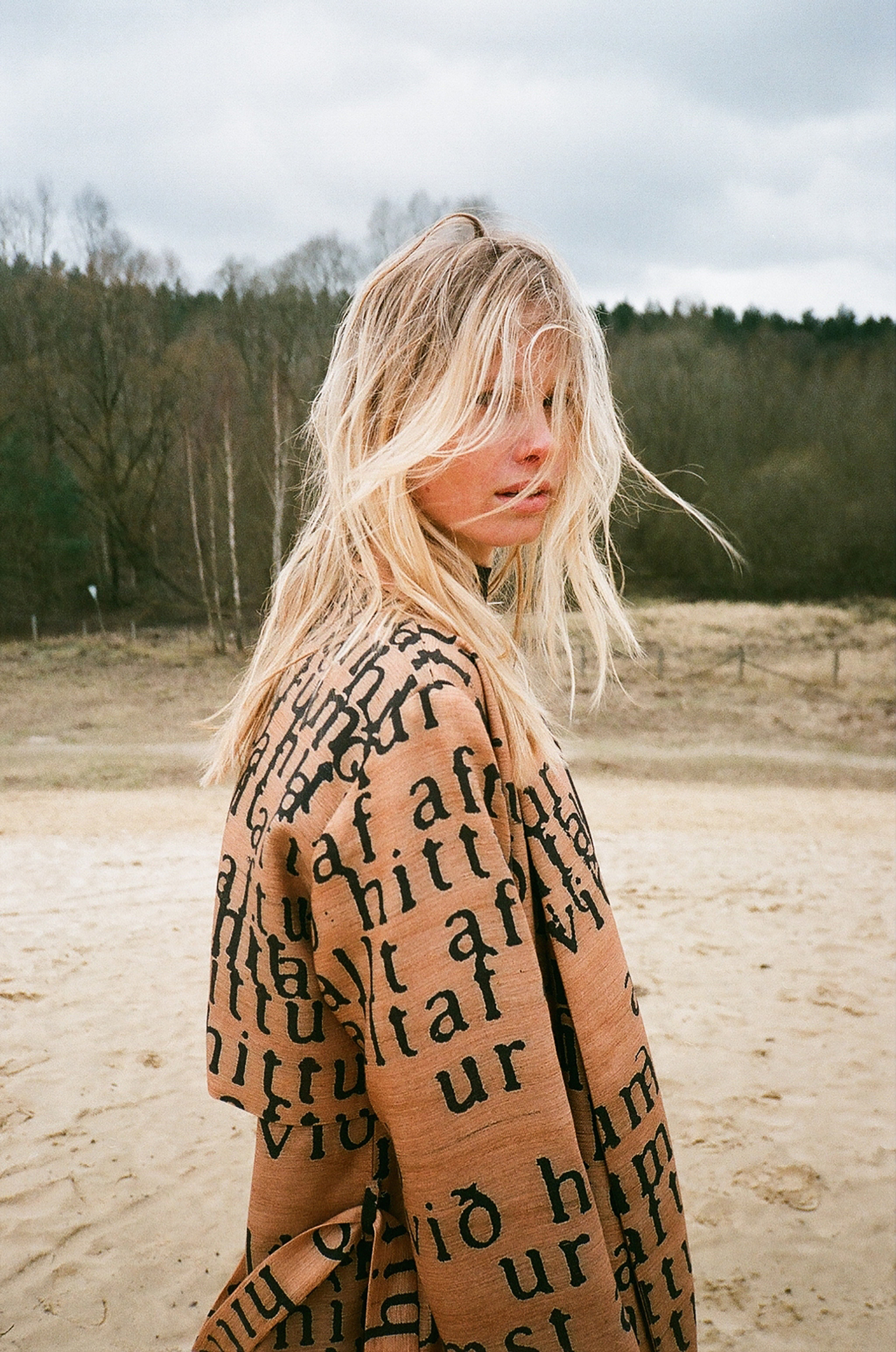 ‘I believe clothing affect people in so many ways – personally I always go for comfort. Feeling good in your own skin and clothes has a positive effect on everything you do’ says Helga, the designer behind the clothing label Helicopter. When designing, Helga is inspired by nature – working mostly with colors and shapes, everything from Icelandic rocks and moss to flamboyant exotic birds.

Helga’s latest collection took an unexpected turn when she decided to work with her former boyfriend and artist, Halldór Ragnarsson, after he contacted her proposing a collaboration including his work. Rising to the challenge, Helga created Helicopter’s autumn/winter collection ‘We Always Meet Again’, inspired by the past and its effect on the present. Available in October / November 2015. Helga Lilja graduated with a Bachelor degree in fashion design from the Iceland Art Academy in 2006, having also completed an exchange program at the Gerrit Rietveld Academie in Amsterdam. However, she says that the three years she spent at NIKITA Clothing gave her the best education. Helicopter was founded in December 2010 after receiving positive reactions to her work at a pop-up design market.

Helicopter clothing has received worldwide attention and can now be found in an ever-expanding variety of outlets in the UK, USA, Japan, Italy and Germany, including the Icelandic co-op design store Kiosk, where Helga is a co-owner. Such operation is very convenient according to Helga as it allows her to interact one-on-one with her customers and get feedback. ‘The idea behind the store is almost too good to be true. It created the platform for eight fashion labels to grow and expand and those labels operate and employ the store. Who knows how Helicopter would have developed if not for the great adventure our co-op has been.’ Helga has made two collections annually but is considering smaller and more frequent collections from now on. With all the ideas swirling around, her worst nightmare is not to be able to execute them all. ‘Helicopter is turning five years old in December. There are so many things I want to do for the occasion but for now it will remain a secret. I encourage people to keep track! At the moment I am following up on the production of ‘We Always Meet Again’, finishing the summer collection 2016 and starting the winter collection 2016/2017. I am also is setting up workspace in Berlin where I am currently located. Always having so much fun!’

When asked about her brand name Helicopter, Helga Lilja points out the first two letters in her first and middle name – ‘He’ and ‘Li’ – as well as always having loved helicopters. ‘My mother once told me: Where no one else can go, the helicopter goes. Those words were printed in my mind and give me comfort when I need it. I care for the name, despite its faults. For example, few people realize Helicopter is an Icelandic design. When searched for on the Internet the results are usually photos of children’s clothes with helicopters printed on them.’ Helga Lilja and her boyfriend Stephan Stephensen have started collaborating on a clothing label inspired by seamanship – ‘Bið að heilsa niðrí slipp’ or ‘Send My Love to the Shipyard’ Where they specialize in unisex knitwear. ‘These are directional light signals from cardinal buoys,” Helga explains, indicating the pattern on one of the sweaters. ‘They are in Morse code. North, for instance, is one continuous signal while West has nine short taps followed by one second of silence. Each direction has its own ten-second signal that goes with it.’ The idea emerged after a group exhibition held by the Icelandic Fashion Council and musicians at DesignMarch 2014. ‘The name does not pronounce as easily as ‘Helicopter’ so we like using the acronym BAHNS which is the German word for ‘trains’. That also goes well with helicopter.’

Although having enough on her plate, Helga considers the possibility of sub branching Helicopter. ‘I run my business alone and would indeed need someone to manage it with me and keep me under control – so not to get lost in my own creativity. This is a lot of work but you do your best for your ‘baby’.’ As a fashion designer in Iceland, Helga comments on the government’s poor input to the creative industry – for example the outdated customs law. ‘When importing samples used for prototyping or introducing a whole collection, the customs cuts into the samples without consideration for its importance to the designer and his creative process. According to current customs law, you have to pay taxes for a product as if it was a sales product, when it is not the case. This is just one of many issues making it hard to be a fashion designer in Iceland.’ According to Helga this is not the case in Germany. ‘Designers are given the space to work with samples and prototypes and the whole process is faster.’

Finally Helga listed a few of her most influential designers. ‘I try not to study other people’s work to get ideas but I can name a few of my favorite designers – Bernhard Willhelm, Henrik Vibskov and Eygló. The designers and co-owners at Kiosk also inspire me, they are all so different but share the fact that they are all total (complete?) geniuses.’