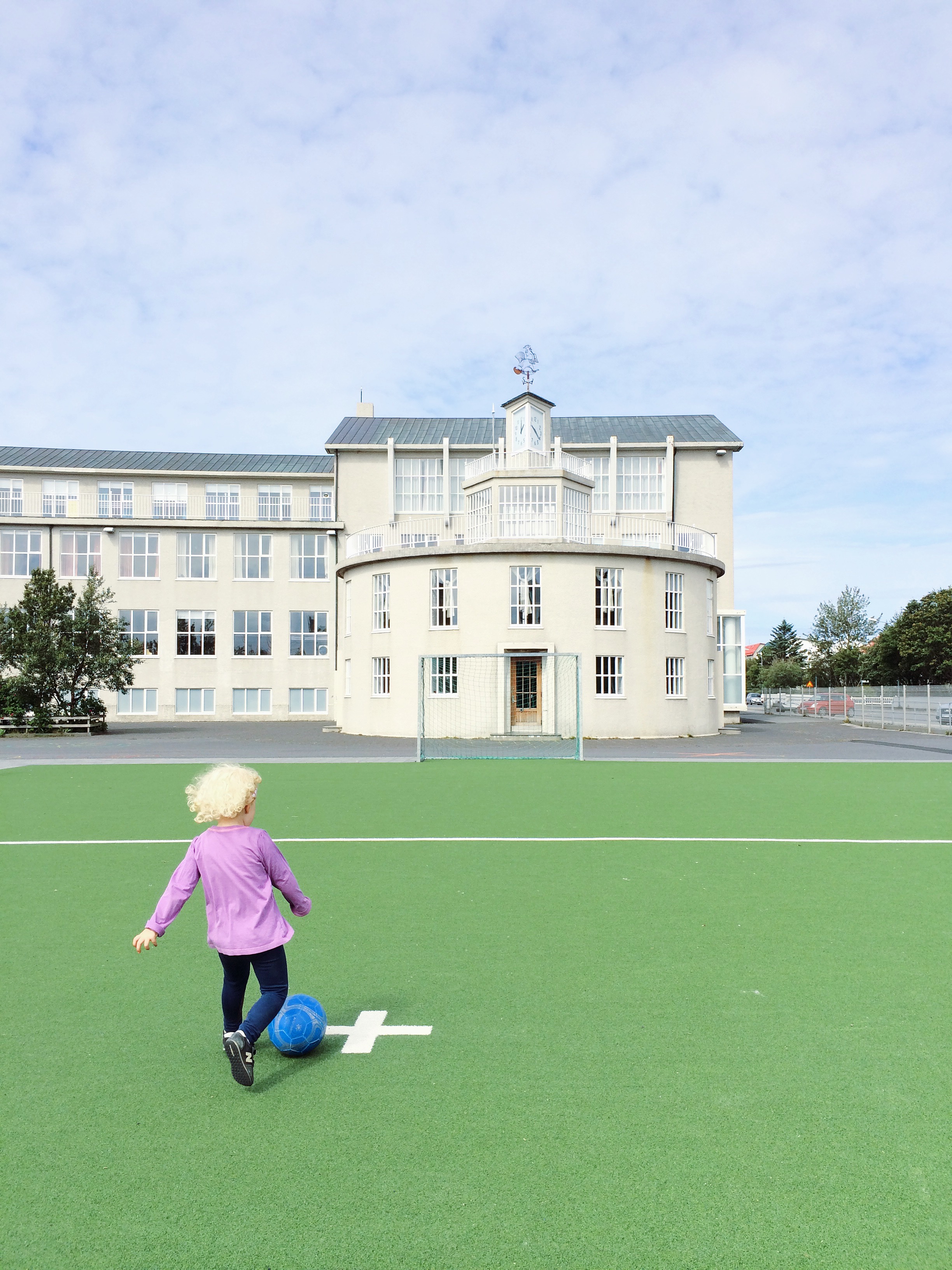 Children spend up to eight hours every day at school or in kindergarten. It is vital that the surrounding grounds are designed with their needs in mind. The design of play spaces should aim to provide children with an outlet for play and creative energy, fulfill their need for exercise, and encourage outdoor activities and games. It is common rule that all children should engage in moderate or vigorous physical exercise at least 60 minutes a day. Well-designed playgrounds stimulate children’s imaginations and provide a space that encourages movement as well as both structured and spontaneous play. Playgrounds need to be safe, but also well-constructed and durable so that they can withstand punishment from children and weather alike.

Research has shown that outdoor activity has a demonstratively positive effect on concentration, learning and social interaction. It is important to protect the city’s play spaces and to ensure that they are both captivating and fun. Public play spaces, including school and kindergarten playgrounds, make up an important part of the city’s green areas and they must stimulate children and adults alike. The role of exercise and outdoor activity in the daily lives of children is clear—even more so due to the fact that they learn through play. It is also important to avoid uniformity and to bring out the individuality of each space by focusing on a range of playing options. The new playground design start from the concept and environment as a whole, while the actual playing equipment itself follows. Landscape architects have a key role in this through studying the local topography and creating an environment that results in an inspiring play area and public space. A changing city – the future of playgrounds

Reykjavík faces extensive development in the next years. There has been more focus on urban density in older neighbourhoods, while construction in the suburbs has fallen sharply. With only a few central playgrounds, there is a need to improve the existing spaces, and to create new spaces, due to the population growth that comes with urban density.

In 2010, the Mayor of Reykjavík appointed a steering committee on playground policy, which works with a multi-disciplinary team of experts on Reykjavík’s playground strategy, with the aim of ensuring that the city’s play spaces meet children’s needs and wishes. Among the main goals are the establishment of priorities for the future, the construction of different types of play space around the city, the mapping of play spaces, and looking into how current spaces satisfy the needs of children as stimulating play environments.

There are 256 open play spaces in Reykjavík and 85 kindergarten playgrounds. Kindergarten and school grounds are used as play spaces after closing on weekdays and weekends. The city’s aim is to reduce the number of conventional playgrounds and improve those areas that remain through redesign and maintenance. A greater number of larger, higher-quality spaces offers a more interesting option for greater diversity, as opposed to many smaller spaces that only have one swing and a spring rocker, as has been the situation for the last 20-30 years, and as remains widely seen today. The location of playgrounds is also important, as is access and links to public paths. Although apartment blocks’ design generally includes play spaces on their grounds, it is an unfortunate fact that they are rarely prioritized.

As part of this planning, it is important that there is a strategy to ensure that play areas and kindergarten grounds receive the space they need. There are many examples of countries where growing urban density has led to a significant decrease in the size of kindergarten grounds, and also to the overshadowing of kindergartens and green areas. The latter is of particular relevance to Iceland, where the sun is low in the sky for a large part of the year. Reductions in the size of play spaces are concerning as there is a direct correlation between the size of the space and the amount of exercise. Research has shown that children who spend time in larger kindergarten play areas move around 20% more than children in smaller spaces, as they travel around the site more. Furthermore, larger grounds reduce the risk of children running into each other. In recent years, there have been significant changes in Reykjavík’s planning strategy. Health and safety regulations and maintenance cost restrictions make playgrounds complex projects for landscape architects. These concerns have resulted in the decreasing use of natural materials in favour of low-maintenance resources such as rubber and asphalt. Good designers look at this as a challenge rather than a problem. The consideration of greenery and varied natural environments in play spaces is a vital part of the planning process, but unfortunately these elements seem to be in decline because of the expense involved in maintaining vegetation during its early years. This trend needs to be turned around, and we need rather to increase the emphasis on diverse vegetation to create play environments that are attractive while also providing shelter and defined settings. Trees and bushes highlight seasonal changes and attract birds and insects, which children enjoy watching and studying.

Interdisciplinary cooperation between school representatives, landscape architects and parents is extremely important in the design of school grounds, and it is just as important to include the views of children and to use their behaviour as a guide. Dialogue and collaboration across groups from different fields increases the likelihood of good results.

Copenhagen is known for its diverse and innovative playgrounds, which are created through the collaboration of multidisciplinary teams. Many of the city’s playgrounds are so-called “nature playgrounds,” which offer a play environment where imagination leads the way. These spaces bring the children closer to nature and encourage them to explore their environment, with very little use of traditional playground equipment, such as see-saws and swings. Danish landscape architect Helle Nebelong has won praise for her designs for nature playgrounds and so-called “sensory gardens.” Helle’s playgrounds are often set in public parks and are extremely popular with children. Fælledparken, one of the largest parks in Copenhagen, is the home of a natural playground designed by Helle, and has also introduced new play spaces designed by the Danish landscape architecture studio GHB a/s, all of which are designed around specific themes. The new play spaces are set on the outskirts of the park, allowing the gardens to maintain their original form, virtually unaffected by these large additions. The themed play spaces have been extremely popular since they opened, with significantly more people visiting the park than before, while locals have expressed great satisfaction with the changes. A vision of the future

Our society is continually evolving. We need to design playgrounds that promote movement, free play and creativity, and that stimulate the senses to counterbalance the growing number of hours spent hunched over computers.

Well-designed play spaces are not only important for children; they are also meeting points for the neighbourhood community. We need to consider diversity and make the most of local topography and the potential of each individual site. The possibilities of play require more than merely setting up playground equipment. Rather, we need to create an environment that offers the widest variety of playing options. Let’s surround our children with natural materials like stone, water and vegetation.

Many of the playgrounds in Reykjavik have become run down and need a new role. The city and local authorities should recognise the benefits of putting additional resources into the creation of quality play facilities, which, without doubt, have a hugely positive impact on the environment, the life in local neighbourhoods and the future of our city. Svava Þorleifsdóttir is an landscape architect working at Landslag architects.

Aðalheiður E. Kristjánsdóttir is an landscape architect working for Landmótun architects, and was one of the keynote speakers at a FILA conference/forum on children playgrounds during DesignMarch 2016. (FILA – The Federation of Icelandic Landscape Architects.)