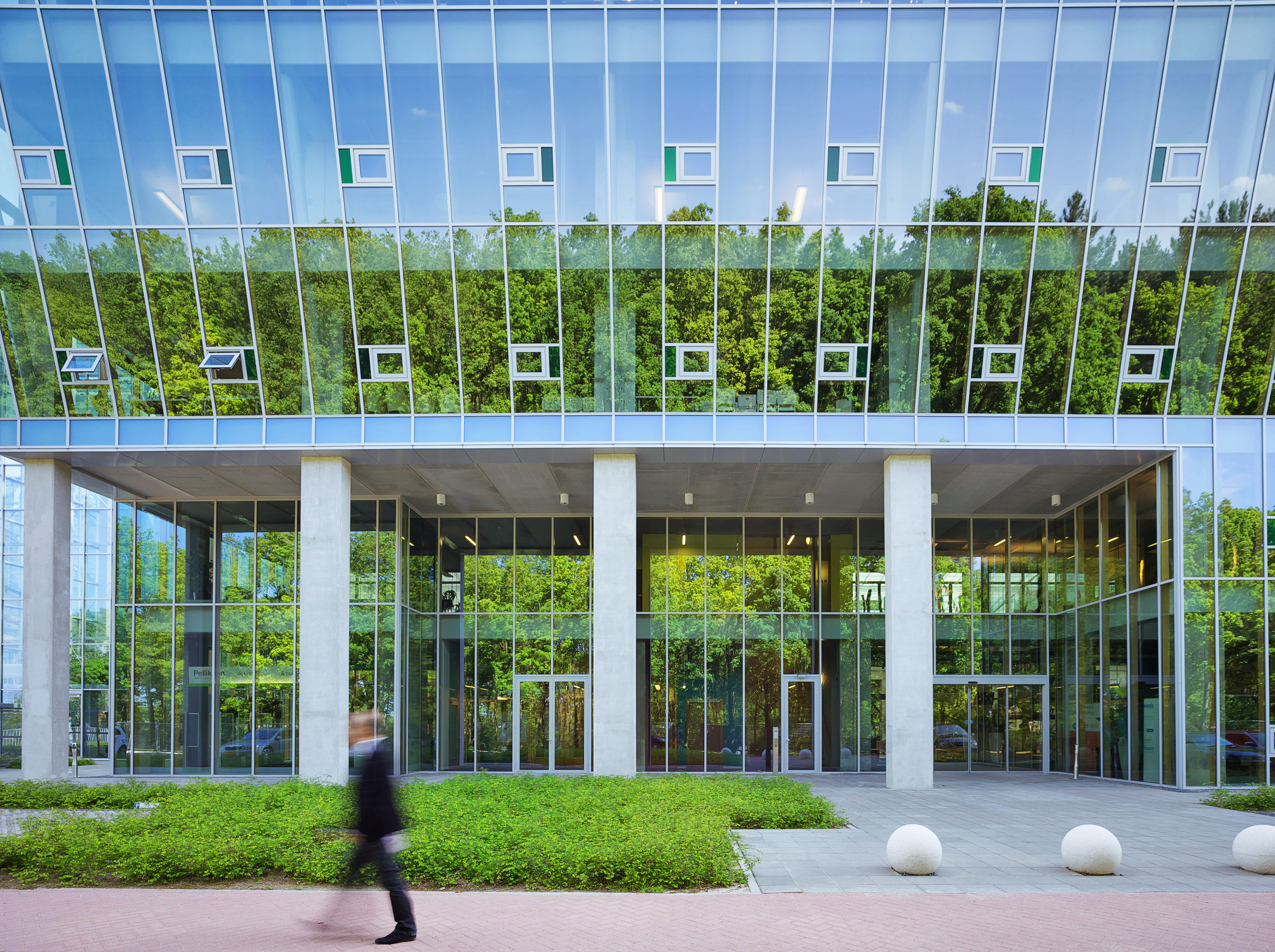 One could say that Jón Kristinsson is an interesting combination of an inventor and an architect. He speaks as a physicist and thinks in sustainability. Jón has been based in Deventer, Holland for the majority of his life. He studied architecture at Delft University of Technology where he later became a professor in sustainable technology and design. Jón is known for having designed the most sustainable building in Holland and is well known for his inventions in the field of sustainability. HA magazine is curious why he is known in Holland as the father of sustainable architecture. Jón was married to architect Riet Reitsema who died last year. The couple worked closely together and operated the ongoing architecture and engineering studio Kristinsson. Photo by Arnar Fells

Fascinated by Force of Nature

During his high school years he was at sea and was granted permission to take his exams alongside work. Early on, he became interested in sustainable development, assuming the seamanship had something to do with it. At sea he became conscious of the environment and forces of nature, whether it was the boat engine, winds or waves. Jón shares with us a similar story about his brother, Björn Kristinsson, an engineer and former professor at the University of Iceland. Throughout the years they have worked closely together on various technical implementations.

As an architect, Jón has always been ahead of his time, using construction engineering as a focal point. He concentrates on elements such as radiant heating, geothermal energy, density and heat exchanging, concomitantly sketching references while explaining. When looking at his work, it becomes a bit unclear whether Jón should be referred to as an architect or an inventor – he claims to be somewhere in between. “Architects focus more on form than physics. If form is your only tool, you will have a hard time making ‘good’ architecture.” Jón and Riet published the book Integrated Sustainable Design and is used as teaching material in the sustainable design master’s program. The book contains Jón’s suggestions on creating hollow cyclades, enabling Holland to become sustainable in energy. It may be noted that the book was recently published in Vietnam and is being translated to Chinese.

Thirty-year-old drawings created the most sustainable building in Holland

One of Jón’s first projects in the field of sustainable building was a proposal for a competition for the town hall of Lelystad in 1976. Jón was very forward thinking in his design for the town hall and had it been built as proposed, it would have become the most sustainable building in the world at the time. He won the competition but the building was thought to be too innovative. In the end a decision was made to take a more conventional route for the construction and not to use Jón’s drawings. “People were not as interested in sustainable living thirty years ago. Nuclear energy was supposed to solve everything.”

When Jón was asked to design Villa Flora, a building for Floriade 2012 – the international horticulture exposition at Venlo, he dusted off the thirty-five-year-old drawings of the town hall of Lelystad. The drawings were updated and modernized and turned into a landmark of sustainability. The building is divided into two sections; a 4000 square meter office building that requires only minimum air-conditioning and a 6000 square meter greenhouse on the south side. The building has a parabolic solar collector that utilizes the solar energy for heating and cooling, harvesting the excess energy in thermal heat storage beneath the building. The soil retains the heat for use during winter seasons. Solar cells and organic waste is used to generate electricity with no other power source needed. The excess energy is enough to power the nearby buildings. “It is a bit comical to think that the most sustainable building in Holland is based on over thirty year old ideas. But what is even more comical is that next to Villa Flora is a large building called Innovatorum or ‘The Building of Inventions’ that relies on Villa Flora for energy,” explaining that only two hectares of greenhouses can provide heat for eight hectares of housing, making it easy for Villa Flora to provide energy for a whole neighborhood. According to Jón, the cost of Villa Flora was only two thirds of what a standard building would cost due to the low building mass. Villa Flora can be disassembled and built somewhere else – it does not get more eco-friendly than that. When asked why such buildings are not more common, being eco-friendlier and cheaper than standard buildings, he did not hesitate to answer: “It is obvious that the construction industry and politicians are afraid of technology and the same can be said for many architects as well.” In Jón’s proposal for Lelystad he suggested using technical solutions that he has then used ever since, such as the thermal heat storage in soil and balanced ventilation heat recovery.

Jón has been working on introducing balanced ventilation system equipment. It all started in 1998 when Jón received the Royal Shell Awards. The prize was used to develop a new type of ventilation system, an air/air heat exchanger. Ventilation systems seem to be the weakest link when it comes to saving energy in buildings. This new type of system was given the name Breathing Window but since it is not an actual window, the product name is now Fresh-R. The use of Fresh-R has proven to reduce up to 40% in heating costs for apartment buildings in West-Europe as well as up to 50% cost reduction after only two years of use in Reykjavík. Jón’s Breathing Window is based on air/air heat exchanging. The ventilation units in Fresh-R consist of 1/10 mm 8 km long copper thread producing 90% heat recovery. The system uses only 3W electricity and provides balanced CO2 ventilation, up to 120 m3 per hour.

Alongside the ventilation units, Jón is working on developing a multi-purpose low temperature radiator based on water/air heat exchange, the HeatCoolCleanVentilate or HCCV-19, with one very important factor – that it can also be used as a cheap solution for air cooling. It is Jón’s conclusion that by implementing both the HCCV-19 system and the Breathing Window system, gas heating can be deducted and electrical heating cost can be decreased by 50-75%.

The inventions in Icelandic context

Jón has worked in Holland his whole life, making his inventions suitable for local conditions. It raises the question if the emphasis on energy saving is as relevant in Iceland. “The conditions differentiate in those two countries. Icelandic buildings are often better constructed but the HCCV – low temperature ventilation system I have been developing could also be of use in Iceland. This system only requires 35°C water to heat up a whole house. In Iceland it is quite common to use additional hot water to melt snow in driveways. This is a complete waste because the water can easily heat up another house first and then the driveway. We used a prototype of this system in Iceland and it resulted in 50% reduction of heating cost. It should also be noted that air-conditioning in Icelandic buildings could be improved. There it is common to open up all the windows and turn up the heat, but thats just throwing away energy.“ Component form the HCCV19, a heat pump for domestic heating and cooling. It can save of up to 60% over existing technologies and is noise free.

When moving on to urban planning issues in Reykjavík, we asked Jón if he agrees with those who consider the issue to be the essential factor in environmental discussions in Iceland. “If something is to be recognized as eco-friendly it should be something that the next generation is going to want to inherit, utilize and preserve. It is essential to deliberate before executing. Deciding not to build, is often most eco-friendly decision one can make. But one should not forget that cars need more energy than housing. In Europe, half of the energy used is for cars. Imagine how much space is used for private cars in Iceland. All those jeeps are used 98% of the time within city limits. It is unacceptable for people to drive around in jeeps in the city only for that one trip to the countryside. In this context I think it is important to consider the option of building a subway in Reykjavík.” Harvesting Energy for the Future

When discussing use of energy and sustainability, Jón agrees with the common assertion that it is easier to talk the talk than walk the walk. “We are too late. Take the US for example, people are just starting to realise what is happening because the fossil fuel system is about to collapse.” But Jón is not about to give up although the world is a bit slow to catch up on sustainability. He is working hard to finance a huge wave power project, harvesting energy from ocean surface waves. Jón considers floating power plants to be the future in harvesting energy – but this is a topic for another interview and article. Those who are interested can study his ideas in this video: http://oceanwavepowerstation.com/ Jón´s idea of a floating ocean wave power station. By transforming the enormous power of the ocean waves the structure could power more than 30.000 homes.

It is obvious that the architect and inventor, Jón Kristinsson, is far from retiring although celebrating his 80th birthday this year. The advice he has for young designers is this: “Quit refining and improving, start reinventing.”