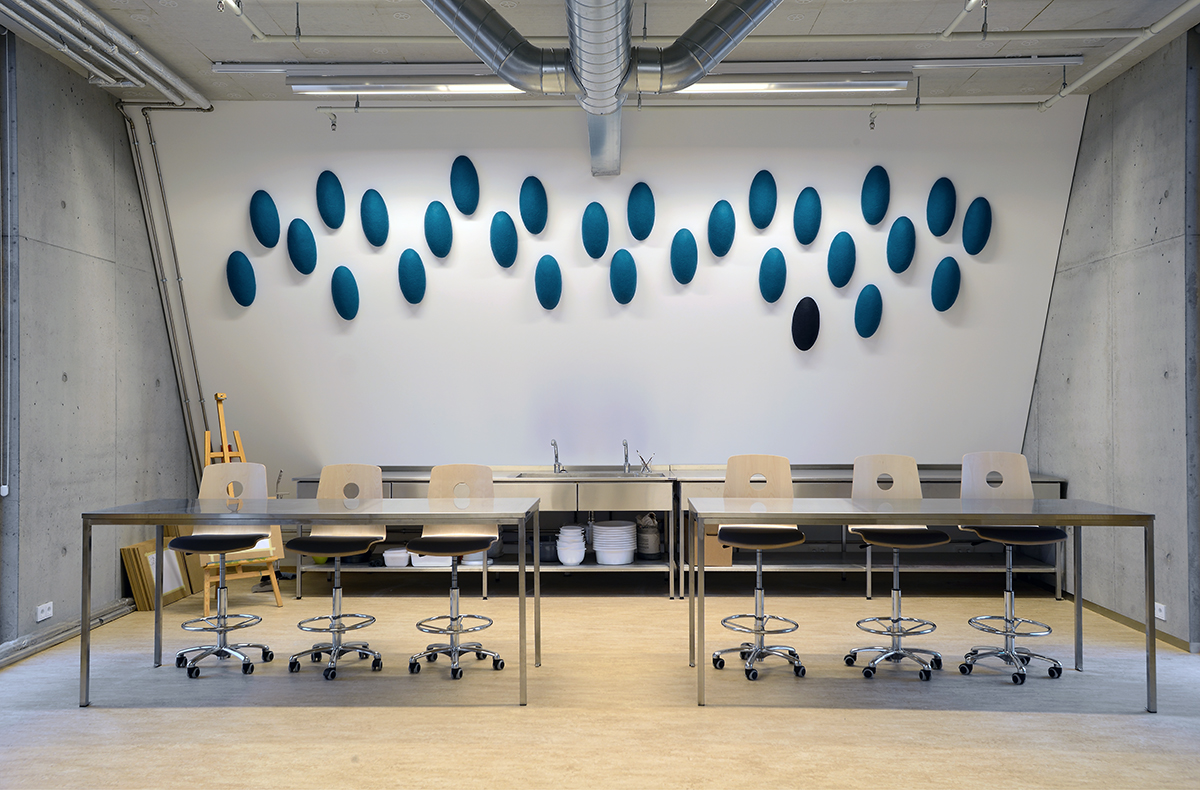 Bryndís Bolladóttir’s wall mounted bubbles from the productline KULA, have caused a stir across the board. The bubbles shift between a variety of functions depending on which materials she uses to construct them. Her KULA product line includes items such as hooks, pot stands, toys, sound absorbers, and sound diffusers. The basic form, however, is always a half or whole sphere with the top layer made from felted wool. Bryndís is educated as an artist and a textile designer. She has been working on her products since 2009 when she designed bowls and placemats created from crochet heat-pressed into plastic. The products were manufactured by Örvi, a work training center for people with disabilities. She is among those who have landed a contract at Design Match, a kind of  “speeddating” event aimed at connecting designers and manufacturers at DesignMarch each year. The Danish design wear manufacturer, Normann Copenhagen, launched the production of hooks and pot stands from the KULA product line that had been developed in cooperation with Örvi. The production later moved to the east of Iceland, where it was shipped to vendors throughout Europe.

Since then Bryndís has been developing ideas in the field of sound solutions. Recently she created the intriguing sound absorber/installation work for the high school in Mosfellsbær, FMOS. She designed the sound solutions in cooperation with the building’s architects, Aðalheiður Atladóttir and Falk Krüger of A2F architects. Bryndís also created the color schemes that were used in the selection of glass and textiles. According to Aðalheiður the architects had placed emphasis on the idea that the art displays should be an integral part of the building. It was therefore decided to hold a closed art competition at FMOS. Four artists were invited to take part and they all came forward with diverse and compelling proposals. The jury was, however, unanimous that Bryndís’s entry, “A creative pathway to the future”, was the most in line with the ideology of the competition. Í At FMOS the emphasize was on green design solutions wich led Bryndís to do research in that area. “I went to the recycling plant where I saw crushed glass with the sun glinting off it. My heart skipped a beat. I researched how glass has been used to reinforce concrete and so on. I joined forces with Gísli, a floor installer with Malland, and we experimented with processing the material. We ended up grinding the glass down and laying it like Pebblecrete flooring. However, public buildings have very strict rules about certifications so it didn’t work out. But I kept searching and eventually figured out a way to use glass as a filler in flooring solutions. According to Bryndís the designers worked with the concept of flow throughout the school, and repetition in colours and shapes. “We were absolutely on the same page with that. The colour selection is inspired by nature – buttercup yellow, sky blue, grass green – with the tones tuned to be in harmony with each other. “Fertile green ground” is green bottle glass that glitters when you come into the school, and the pollen floating in the air sticks to the walls as “wool clumps”. I also wanted to connect the glass in the concrete into the lobby of the school, where nature and construction meet.” The collaboration began early in the design process and didn’t finish until it came into use. The project developed and changed during the process due to various factors. As stated previously, they needed to abandon plans for the glass floor, which meant that the wall art became the bigger focus. Bryndís says the next step was to take the KULA installations into noise level measurements, and thus began a collaboration with Guðrún Jónsdóttir, a sound engineer at EFLA Consulting Engineers. Tests were conducted at the Innovation Center of Iceland in accordance with international standards, and function of the KULA sound absorbers & diffusers proved to be of the highest quality. The results have created new opportunities for Bryndís. “The collaboration with A2F has had a huge impact on my company. Without that experience, the company wouldn’t be where it is today. Since 2013 I have been venturing into the international market and last year I made a contract with a company specializing in sound solution consultancy”, says Bryndís.

Aðalheiður agrees with Bryndís on the importance of interdisciplinary cooperation. “That’s how seeds are sown and new things come into existence. But for everything to work it is necessary to adjust and fine-polish all the pieces until everything clicks. In this case everything worked like a dream and we are extremely pleased with the outcome of the collaboration.” Since 2006, Bryndís has worked on developing felting machines with the wool processing of Frú Lára in Seyðisfjörður. According to Bryndís, there has been no comparable production here in Iceland. “I put a lot of emphasis on working with Icelandic raw materials and trying to build up local industry. After the crisis hit, I felt there was an opportunity to work on innovations. The pace had slowed down which enabled interaction that hadn’t previously been possible. We need to focus on creative thinking and collaboration in a broader context.”